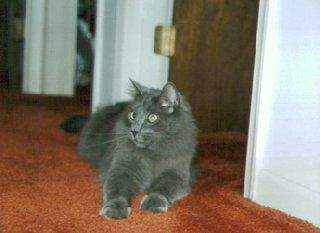 Scratchings From The Litter Box (A monthly column of random thoughts and mewsings from Rocky).

Rocky was a gray medium hair monochrome with luminescent green eyes. Only his tongue and paw pads were pink. His paw pads were originally gray but he wore it off. He had soft bunny fur with long guard hairs and was magnificently fluffed. Some cats have fluffy tails that become somewhat sparse closer to the cat or during hot weather but Rocky's tail was poofy to the root year round and stayed that way his entire life. Rocky had cute tufts of ear fur. Ear fur is sexy if you're a cat. Rocky's fighting weight was 12 ½ pounds (5.7 kg) but he lost weight during his last year. He had an 11 inch whisker spread, 5 inches of whisker on each side with an inch of cat in the middle.

We think Rocky was a Norwegian Forest Cat.  Here's another article.

Graylyn Rockford is descended from many illustrious ancestors.

The Scottish branch of the family, known for their gray on gray tartan, carries the Graylyn name. Don't look for photos of Rocky wearing the kilt. Rocky wore his fur coat and nothing else. As Rocky said "Fur is always in fashion, if it's your own."

The African branch of the family consists of a pride of miniature gray lions. The gray lion that made the journey to America had chosen as his personal human the daughter of a great chief. When another tribe attacked their village, they captured the royal family and sold them into slavery. The small lion followed them to the coast and slipped aboard the ship bound for the New World. When they were off the Carolina Coast, a hurricane struck and the ship broke apart on the treacherous shoals. All the humans perished but the small gray lion survived by digging his claws into one of the ship's timbers. He washed ashore somewhere near Southport, NC and made his way inland to the Piedmont.

One of Rocky's immigrant ancestors came to America on the Mayflower. About four weeks into the voyage, a litter of kittens was born. When the ship arrived at Plymouth Rock, the mother carried each kitten ashore. In honor of the occasion, the family changed their name to Rockford.

Katborg Grayson and Katrina Rockdotter sailed with Leif Erikkson to Newfoundland on a Viking ship. They remained behind when the Vikings returned home. If they had not been adventurous Viking cats, they probably would have stayed with their humans because Newfoundland was cold and cats like warmth. Cats are amazing creatures but they can't build a fire. Katborg and Katrina began walking south. It took many generations but eventually their descendants reached North Carolina sometime around the mid 1700's.

There were many other brave cats that made the perilous trip across the north Atlantic in wooden ships, but their stories were lost to history.

In earlier unenlightened times, cats weren't allowed in law schools. Human ignorance forced them to slip in and sit under a chair in the back of the room. Fortunately, by the time Rocky was ready to go to law school, things had improved. His biggest problem was whether to attend Yale or Harvard. The Graylyns have always been Yale kitties, while the Rockfords have attended Harvard. Rocky decided to follow in his father's paw steps and attend Harvard. He was the first cat to make Law Review.

After graduation, Rocky started his own practice specializing in kitty rights. Whether it's a lynx in Colorado, a tiger in Siberia, or an alley cat in New York City, Rocky is ready to fight. He was instrumental in the passage of legislation to prevent kitties from being cuddled against their will.

It was only natural that he came to the attention of First Cat, Socks. Monroe K. Katt, a mutual acquaintance, introduced Rocky and Socks. They were close friends and had a profound respect for each other. Rocky often visited Socks at the White House and usually slept on the Monroe blanket in the Lincoln bedroom. When the President decided to appoint a cat to the Supreme Court, he first thought of Socks. Of course, Socks was too busy running the Executive branch of the government to consider the added responsibility of the Supreme Court, so he suggested Rocky, Graylyn Rockford, esq., cut-throat feline attorney-at-law. The Senate confirmed Rocky unanimously as the first feline Supreme Court justice. Rocky gets along famously with all members of the court except for Clarence Thomas after Clarence made an unfortunate reference to a "cat hair on his can of Coke."

In addition to his achievements in the law and government, it was Rocky who taught Michael Jordan how to sky.

According to insider gossip, Rocky was visiting Socks at the White House in February 1997. They were in the Oval Office when Socks left to use the litter box. Rocky curled up behind the draperies. He awakened to a commotion. The President and Monica were in the Oval Office. Rocky peeked out from behind the drapes and saw "everything." Shocked and appalled, Rocky refuses to speak of the incident and lived in fear for many months that Ken Starr would subpoena him.

The Premier Club is an exclusive private club for kitties of distinction. Rumor has it that an inebriated Graylyn Rockford put in an appearance one night in December 1996 with a pack of Dobermans. Kitties were apprehensive, even frightened by the sight of wild slobbering Dobermans running amok around the club and Rocky reveling in the confusion. At first, Rocky denied the allegations, claiming he was dining in his favorite sushi bar with Monroe. He admitted to having a pack of Doberman body guards, explaining that after all he is a public figure, but said the Dobermans were in their kennel at the time. DNA evidence linked the Dobermans to spots on the carpet in the Premier Club and Monroe, being a retired Director of the FBI (Feline Bureau of Investigation), refused to corroborate Rocky's story. Later, an embarrassed Rocky apologized to all club members and paid for the damages. He has promised to never bring any dog, even a Chihuahua, to the club again.

It has been noted that one never sees Graylyn Rockford, esq. and Platinum Cat at the same time. Is it possible that Platinum Cat, founder and leader of the Tactical Tabbies, and Rocky are one and the same? They are both magnificently fluffed, gray monochromes. They are not fat, but they are robust. They have each been seen flying an F-14 Tomcat and driving a gray Jaguar, though only Platinum Cat drives a gray Humvee. Both are staunch defenders of kitty rights. Platinum Cat is more low key and rarely seen while Rocky is quite the cat about town. Rocky is always "where it's at," whether watching the Carolina Panthers from his own private sky box at Bank of America Stadium or chatting with Larry King. All Rocky has to do is mention something in passing and immediately Platinum Cat and his nefarious minions, known as the Tactical Tabbies, are on full alert. Rocky denies that he has ever met Platinum Cat, much less knows him, but refuses to agree to appear together. Has anyone seen the two at the same time? Inquiring minds want to know.

In order to return to his roots, Rocky visited his distant cousins, the miniature gray lions. Very few humans know of their existence. Rocky, accompanied by an elite corps of the Tactical Tabbies known as the Afrikaats, flew his F-14 Tomcat to an isolated airfield in Botswana. He traveled by Land Rover across the border to a small private game reserve where he met with the lions. The lions dined on fresh killed springbok while Rocky and the Afrikaats, being domestic kitties, dined on human food. They ate a traditional South African favorite, fried monkey paws. Rocky thought the monkey brain sauce in the little monkey skull was delightful. Cheetahs, leopards, and regular lions joined the gathering. Rocky gave his usual speech about the struggle for kitty rights around the world.

Why We Don't Have Even More Photos of Rocky

Rocky was extremely camera-shy apparently due to a previously unknown traumatic incident that he refuses to discuss. We discovered that he confided in Monroe shortly after the incident and an anonymous source passed the details along to us.

Rocky was in Paris briefing the top officers of the French Tactical Tabbies and was having a quiet dinner with his top cats in an exclusive Parisian dining room. It turned out to be the same place where Princess Diana and Dodi were dining. (Rocky has always been especially fond of Princess Diana because of her name.) Once Di and Dodi recognized Rocky, of course they invited him to their table for drinks. Rocky proceeded to regale them with many tales of his exploits.

While riding down the elevator, They offered Rocky a ride to the airfield to pick up his F-14 Tomcat. Upon leaving the building, they were assaulted by the paparazzi. With flashes popping everywhere, Rocky's night vision was ruined. He was so stunned, he dropped his drink, (Clam Juice on the Rocks With an Anchovy Twist, Shaken not Stirred), shattering the glass everywhere. Di and Dodi ran to their Mercedes limousine calling Rocky to follow them. Rocky ran that way but he had to dodge the paparazzi every step of the way. Fortunately, a small, elite Tactical Tabby unit emerged from the shadows and whisked Rocky away while clearing a path to a waiting gray Peugeot. (Rocky normally preferred Jaguars but he used a Peugeot while in France.)

Once in the Peugeot, Rocky felt safe. His Tactical Tabby driver easily eluded the paparazzi and took the long way to the airfield so Rocky could recover his composure while enjoying the sights of Paris at night. During this ride, they heard the radio reports of the accident. Rocky quickly realized that had he ridden with Di and Dodi, he would have been in the accident. Since their limousine does not have the cat seat belt option, Rocky would have been thrown around in the car and seriously injured. He might even have lost several of his nine lives.

You may have heard rumors that Dodi gave Princess Di a diamond engagement ring at this dinner. It is possible that this is a false rumor caused by Rocky's presence. Princess Diana's last words to a policeman on the scene were "Where's Rocky?". Due to Di's weakened condition, the policeman didn't hear her correctly and thought she said "Where's the rock?". He incorrectly interpreted Diana as asking about her diamond.